NASA's Kennedy Space Center in Florida is partnering with the agency's Armstrong Flight Research Center in California, Langley Research Center in Virginia, and Space Florida for a program called Sonic Booms in Atmospheric Turbulence, or SonicBAT II. Starting in mid-August, NASA F-18 jets will take off from the Shuttle Landing Facility (SLF) and fly at supersonic speeds while agency researchers on the ground measure the effects of low-altitude turbulence on sonic booms.

Residents along Florida's Space Coast will soon hear a familiar sound -- sonic booms. But instead of announcing a spacecraft's return from space, they may herald a new era in faster air travel.

NASA's Kennedy Space Center in Florida is partnering with the agency's Armstrong Flight Research Center in California, Langley Research Center in Virginia, and Space Florida for a program called Sonic Booms in Atmospheric Turbulence, or SonicBAT II. Starting in mid-August, NASA F-18 jets will take off from the Shuttle Landing Facility (SLF) and fly at supersonic speeds while agency researchers on the ground measure the effects of low-altitude turbulence on sonic booms.

The project is another example of Kennedy's role as a premier, multi-user spaceport. In 2015, the center signed a 30-year property agreement with Space Florida for the operations and management of the SLF. This partnership provides an avenue for a variety of commercial and government partners to have access to use the three-mile long runway. 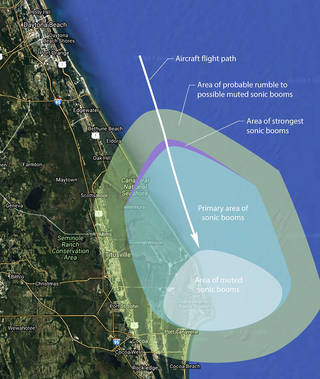 NASA’s F-18 will fly at or above 32,000 feet when it goes supersonic off the eastern coast of Florida. The F-18’s flightpath is positioned in efforts to keep the strongest-sounding sonic booms away from residential areas, while still producing sonic booms over the Kennedy Space Center, where the sonic boom sound will be collected by microphone arrays on the ground. While sonic booms will be more audible on the beaches north of Kennedy, Cape Canaveral Air Force Station will hear “muted,” or quieter, sonic booms. Areas including Scottsmoor, Mims, Titusville, Port St. John, Cocoa, and Port Canaveral are likely to hear a sound closer to the rumble of distant thunder, though people may hear an occasional “muted” sonic boom. Credits: NASA

According to John Graves of NASA Flight Operations in Kennedy's Spaceport Integration and Services, for projects such as SonicBAT, NASA coordinates with Space Florida who manages the facility's schedule.

"Working with representatives from the Armstrong center, we go through Space Florida to request use of the runway," he said. "It's an arrangement that works very well."

The F-18 will begin flights on Aug. 21, flying two to four times a day over a period of ten days. But the actual test window may be two weeks to allow for weather and other possible delays.

"We're hoping we can eventually lower sonic booms to a low rumble," he said. "The goal is to eventually accommodate jets that can fly from New York to Los Angeles in two hours."

Armstrong started SonicBAT investigations at Edwards Air Force Base last year. This will be the second round of tests.

"Edwards is a hot, dry environment," he said. "The team at the Armstrong center wants to now try to collect similar data in the hot, humid climate we have here." 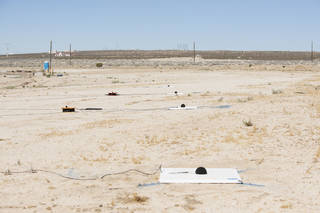 One of three microphone arrays positioned strategically along the ground at Edwards Air Force Base, California, sits ready to collect sound signatures from sonic booms created by a NASA F-18 during the SonicBAT flight series. Similar arrays will be set up near NASA's Kennedy Space Center to collect the sound signatures of booms that have traveled through atmospheric turbulence before reaching the ground. Credits: NASA/Lauren Hughes

The problem is sonic booms are bothersome, loud, thunder-like sounds occurring when an aircraft or other aerospace vehicle flies overhead faster than the speed of sound -- about 767 mph. U.S. Air Force pilot Chuck Yeager was the first to break the sound barrier on Oct. 14, 1947, at Muroc (now Edwards) Air Force Base in California.

Throughout the 1950s and 1960s, sonic booms became a familiar part of American life as military jets became faster and faster. At the time, it seemed that supersonic passenger air travel was on the near horizon. However, the boom created by shock waves, or rapid changes in pressure that occur at supersonic speeds, disturbed people and occasionally caused property damage when military aircraft flew at very low altitudes. Consequently, such flights currently are restricted by the Federal Aviation Administration, except for craft such as the now-retired space shuttle, SpaceX Falcon 9 first stages and the X-37B Orbital Test Vehicle.

"For the upcoming tests, F-18 jets will fly offshore from Daytona at about 41,000 feet," Graves said. "They will fly south, diving down below to around 32,000 feet and accelerating to supersonic speeds to create a sonic boom that will reach the ground where the test equipment is located." 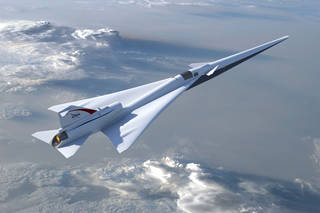 This illustration depicts NASA’s planned Low Boom Flight Demonstration aircraft. The agency and Lockheed Martin have just completed the preliminary design of the Quiet Supersonic Transport, or QueSST, aircraft studying the shape and position of aircraft components, along with the propulsion system to determine what factors contributes to an aircraft’s sonic boom. Credits: NASA/Lockheed Martin

There will be a small motorized glider which can fly with its engine off positioned above the 14,000-foot level to measure sonic booms above the turbulent layer, and microphone sensors set up north and south of Launch Complex 39B.

With this data and building on previous supersonic research, NASA hopes to develop cutting-edge tools and technologies for the design of future "low boom" aircraft reducing or almost eliminating the noise.

The ongoing research goes beyond SonicBAT. NASA and partners in U.S. industry and universities are testing a variety of factors that may make supersonic passenger travel a reality. The next exciting step will be the development of experimental aircraft that can demonstrate low boom flight. NASA and Lockheed Martin have just completed the preliminary design of the Quiet Supersonic Transport, or QueSST, aircraft studying the shape and position of aircraft components, along with the propulsion system to determine what factors contribute to an aircraft’s sonic boom.

In the next phase of this effort, NASA will partner with U.S. industry to build the Low Boom Flight Demonstrator, an experimental aircraft that, when flying at supersonic speeds, will create a soft “thump” instead of the disruptive sonic boom.

WRITTEN BY:
AeroTime Extra
Follow
This great AeroTime author has not written anything about himself yet.
Responses
See more discussion
Related Stories
Defense

The High Court of Ireland and Norway approved the Norwegian Air Shuttle proposed scheme of arrangement to exit the bankr...

Air France A319 performs rejected takeoff due to bird strike

Air France Airbus A319 suffered an engine problem while on takeoff from Marseille Provence Airport, France.  ...

The Italian Air Force carried out the first intercept using an F-35A stealth fighter jet on behalf of NATO’s Balti...