On December 20, 1968, the National Aeronautics and Space Administration canceled the X-15 Hypersonic Research Program after 199 flights.

on 21st December 2017
Source : This Day in Aviation
Zivile Zalagenaite

History Hour: The farewell to the X-15

On December 20, 1968, the National Aeronautics and Space Administration canceled the X-15 Hypersonic Research Program after 199 flights. A 200th X-15 flight had been scheduled, but after several delays, the decision was made to end the program. (The last actual flight attempt was 12 December 1968, but snow at several of the dry lakes used as emergency landing areas resulted in the flight being canceled.)

The X-15A rocketplane was designed and built for the U.S. Air Force and the National Advisory Committee for Aeronautics (NACA, the predecessor of NASA) by North American Aviation, Inc., to investigate the effects of hypersonic flight (Mach 5+). Design work started in 1955 and a mock-up had been completed after just 12 months. The three X-15s were built at North American’s Los Angeles Division, at the southeast corner of Los Angeles International Airport (LAX), on the shoreline of southern California.

While earlier rocketplanes, the Bell X-1 series, the Douglas D-558-II, and the Bell X-2, were airplanes powered by rocket engines, the X-15 was a quantum leap in technology. It was a spacecraft.

Like the other rocketplanes, the X-15 was designed to be carried aloft by a “mothership,” rather than to takeoff and climb to the test altitude under its own power. The carrier aircraft was originally to be a Convair B-36 intercontinental bomber but this was soon changed to a Boeing B-52 Stratofortress. Two B-52s were modified to carry the X-15: NB-52A 52-003, The High and Mighty One, and NB-52B 52-008, Balls 8.

From 8 June 1959 to 24 October 1968, the three X-15s were flown by twelve test pilots, three of whom would qualify as astronauts in the X-15. Two would go on to the Apollo Program, and one, Neil Alden Armstrong, would be the first human to set foot on the surface of the Moon, 20 July 1969. Joe Engle would fly the space shuttle. Four of the test pilots, Petersen, White, Rushworth, and Knight, flew in combat during the Vietnam War, with Bob White being awarded the Air Force Cross. Petersen, Rushworth and White reached flag rank. 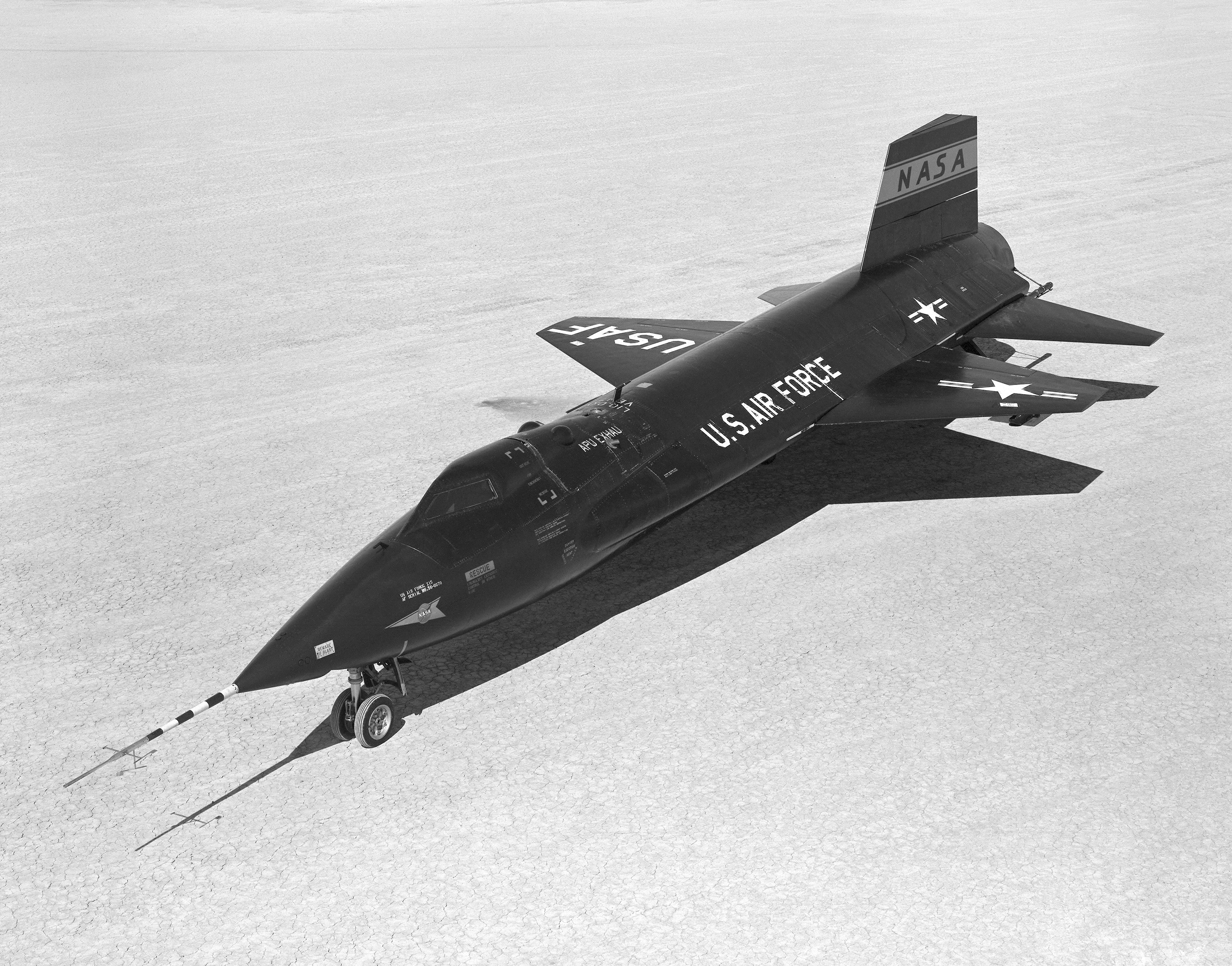 Flown by a single pilot/astronaut, the X-15 is a mid-wing monoplane with dorsal and ventral fin/rudders and stabilators. The wing had no dihdral, while the stabilators had a pronounced -15° anhedral. The short wings have an area of 200 square feet (18.58 square meters) and a maximum thickness of just 5%. The leading edges are swept to 25.64°. There are two small flaps but no ailerons. The entire vertical fin/rudder pivots for yaw control.

Above 100,000 feet (30,840 meters) altitude, conventional aircraft flight control surfaces are ineffective. The X-15 is equipped with a system of reaction control jets for pitch, roll and yaw control. Hydrogen peroxide was passed through a catalyst to produce steam, which supplied the control thrusters.

The forward landing gear consists of a retractable oleo strut with steerable dual wheels and there are two strut/skids at the rear of the fuselage. The gear is retracted after the X-15 is mounted on the NB-52 and is extended for landing by its own weight. 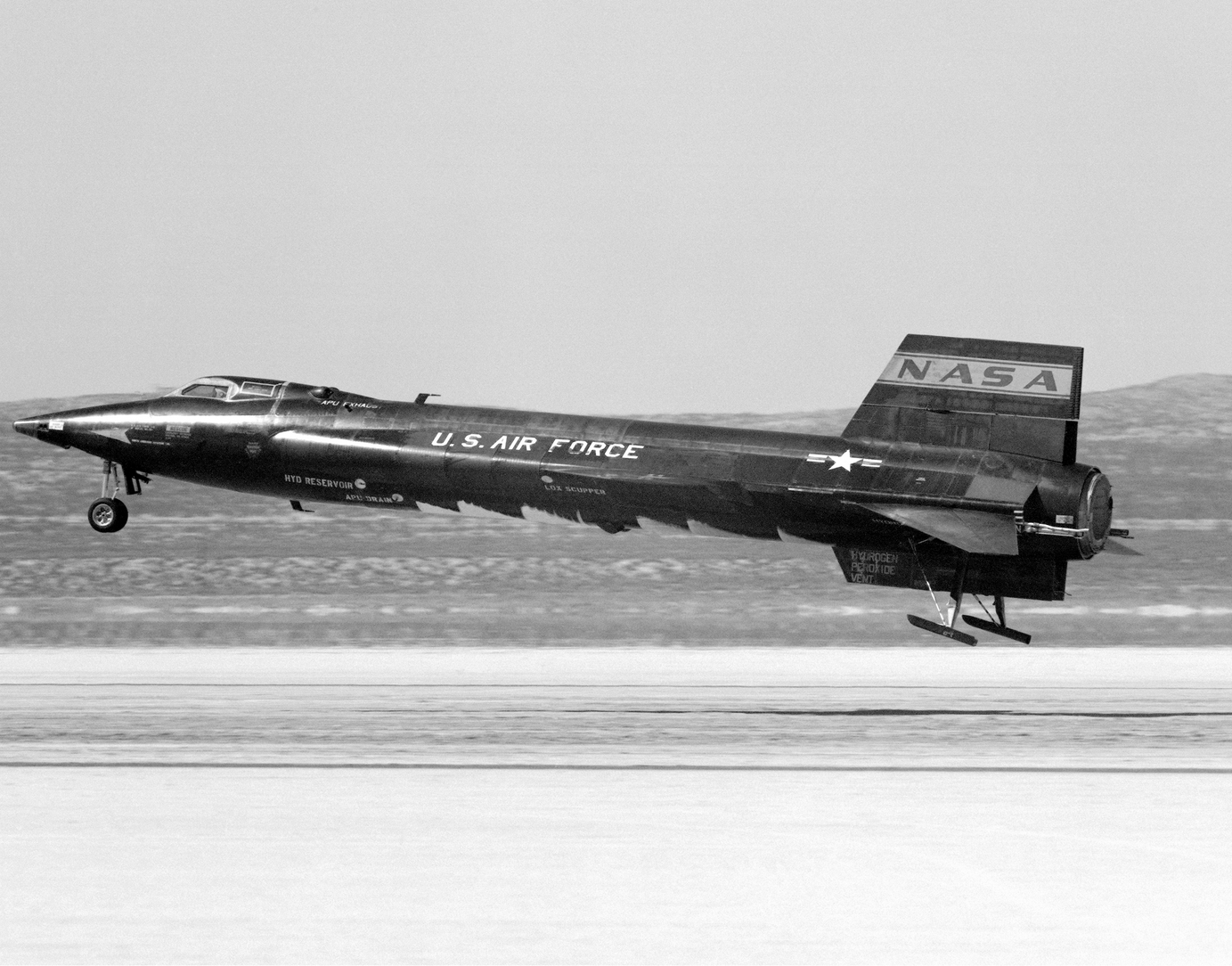 The rocketplane’s cockpit featured both a conventional control stick as well as side-controllers. It was pressurized with nitrogen gas to prevent fires. The pilot wore an MC-2 full-pressure suit manufactured by the David Clark Company of Worcester, Massachusetts, with an MA-3 helmet. The suit was pressurized below the neck seal with nitrogen, while the helmet was supplied with 100% oxygen. This pressure suit was later changed to the Air Force-standardized A/P22S. 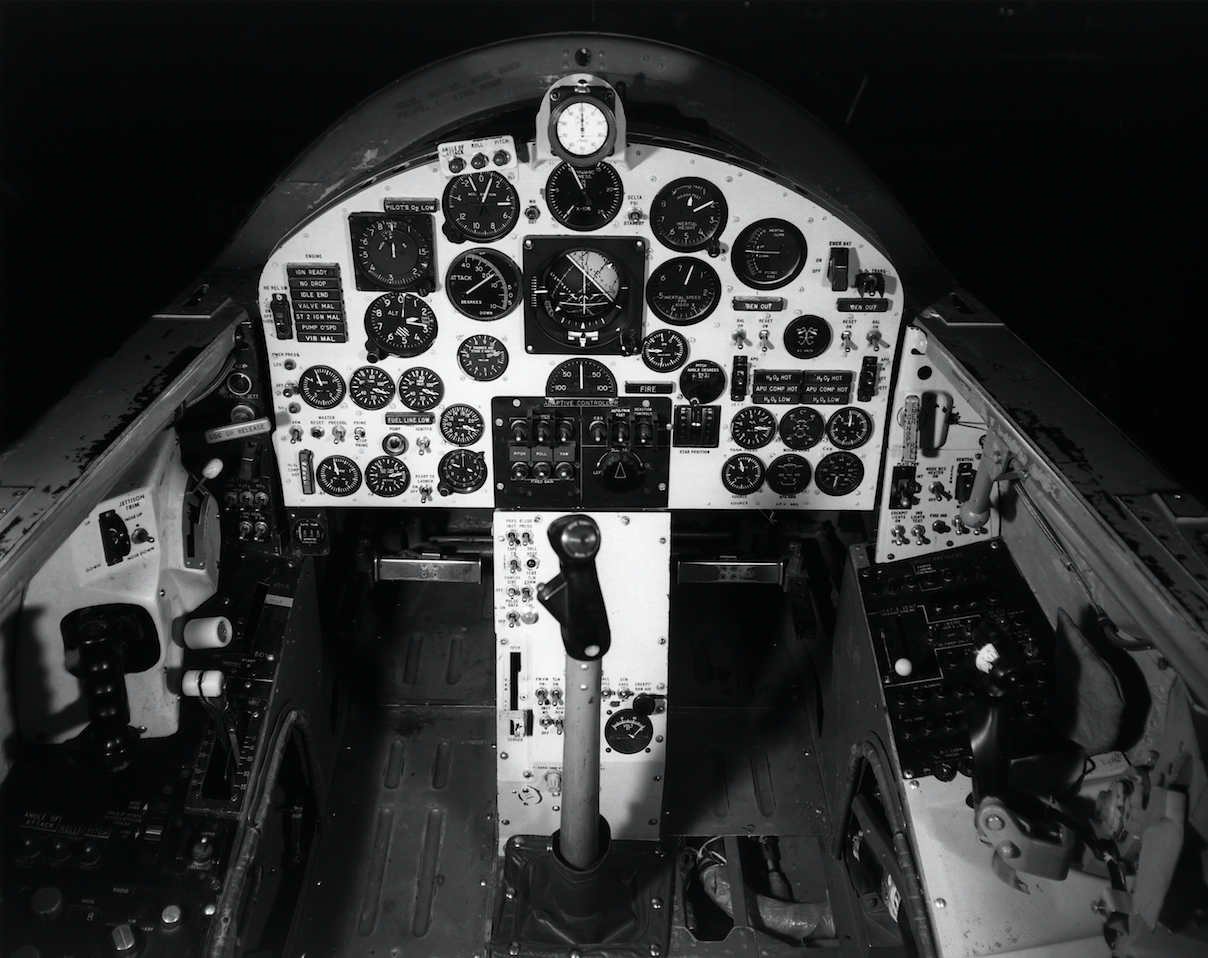 Since the X-15 was built of steel rather than light-weight aluminum, as are most aircraft, it is a heavy machine, weighing approximately 14,600 pounds (6,623 kilograms) empty and 34,000 pounds (15,422 kilograms) when loaded with a pilot and propellants. The X-15s carried as much as 1,300 pounds (590 kilograms) of research instrumentation, and the equipment varied from flight to flight. The minimum flight weight (for high-speed missions): 31,292 pounds (14,194 kilograms) The maximum weight was 52,117 pounds (23,640 kilograms) at drop (modified X-15A-2 with external propellant tanks).

Initial flights were flown with a 5 foot, 11 inch (1.803 meters)-long air data boom at the nose, but this would later be replaced by the “ball nose” air sensor system. The data boom contained a standard pitot-static system along with angle-of-attack and sideslip vanes. The boom and ball nose were interchangeable. 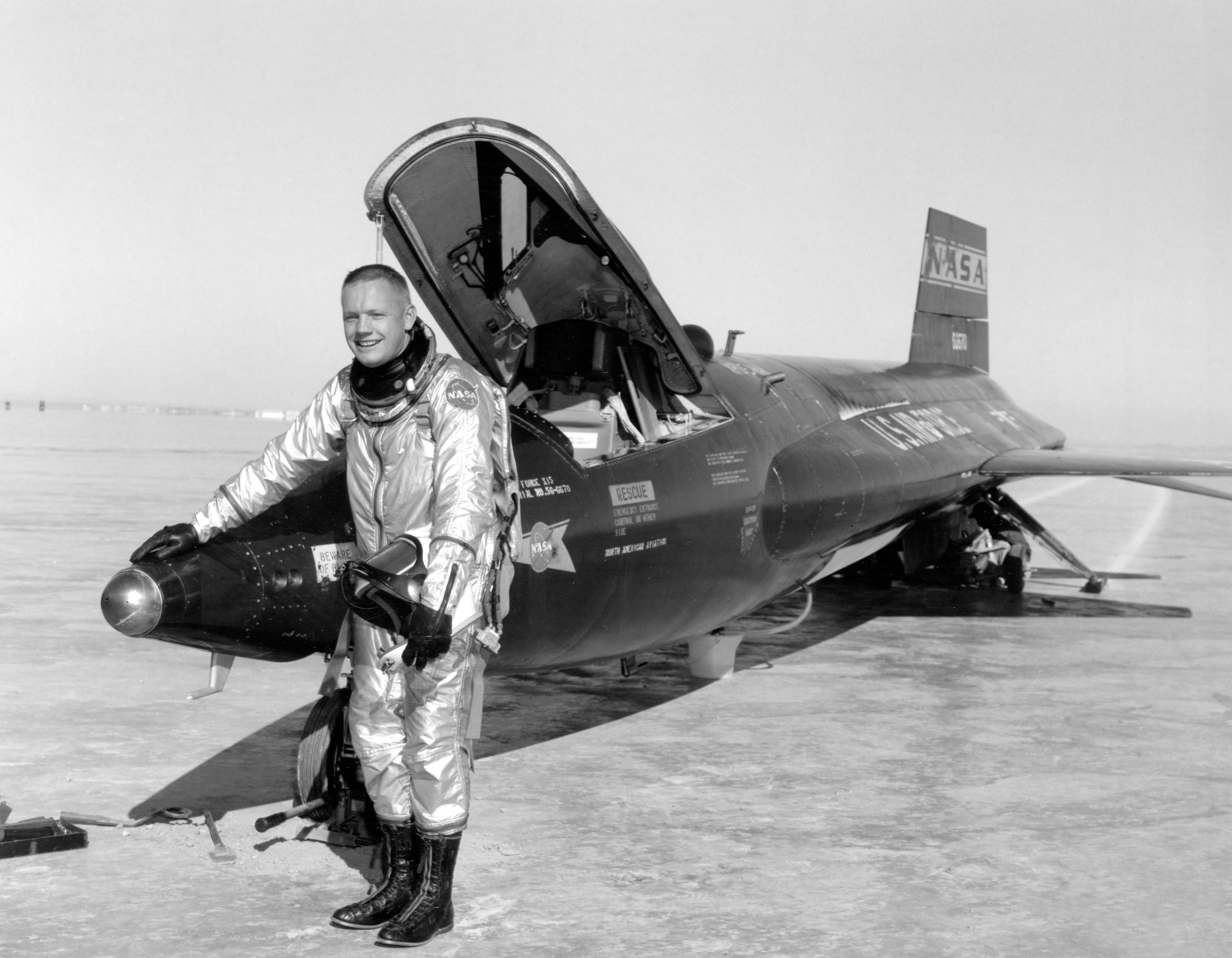 The X-15s were built primarily of a nickel/chromium/iron alloy named Inconel X, along with corrosion-resistant steel, titanium and aluminum. Inconel X is both very hard and also able to maintain its strength at the very high temperatures the X-15s were subjected to by aerodynamic heating. It was extremely difficult to machine and special fabrication techniques had to be developed.

Delays in the production of the planned Reaction Motors XLR99 rocket engine forced engineers to adapt two vertically-stacked Reaction Motors XLR11-RM-5 four-chamber rocket engines to the X-15 for early flights. This was a well-known engine which was used on the previous rocketplanes. The XLR-11 burned a mixture of ethyl alcohol and water with liquid oxygen. Each of the engines’ chambers could be ignited individually. Each engine was rated at 11,800 pounds of thrust (58.49 kilonewtons) at Sea Level. 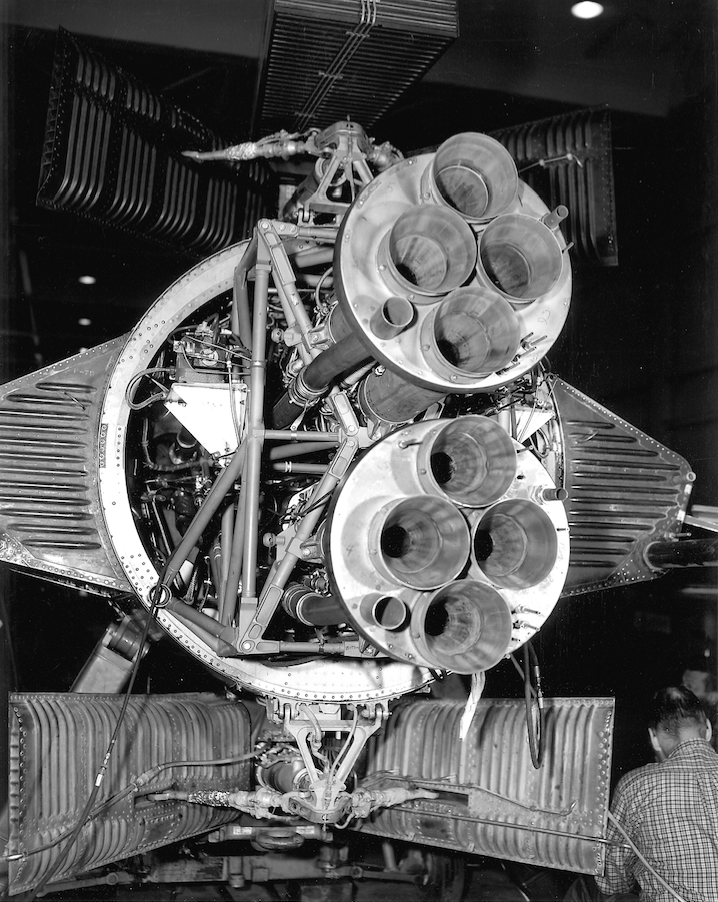 The XLR99 burned anhydrous ammonia and liquid oxygen. The flame temperature was approximately 5,000 °F. (2,760 °C.) The engine was cooled with circulating liquid oxygen. To protect the exhaust nozzle, it was flame-sprayed with ceramic coating of zirconium dioxide. The engine is 6 feet, 10 inches (2.083 meters) long and 3 feet, 3.3 inches (0.998 meters) in diameter. It weighs 910 pounds (413 kilograms). The Time Between Overhauls (TBO) is 1 hour of operation, or 100 starts. 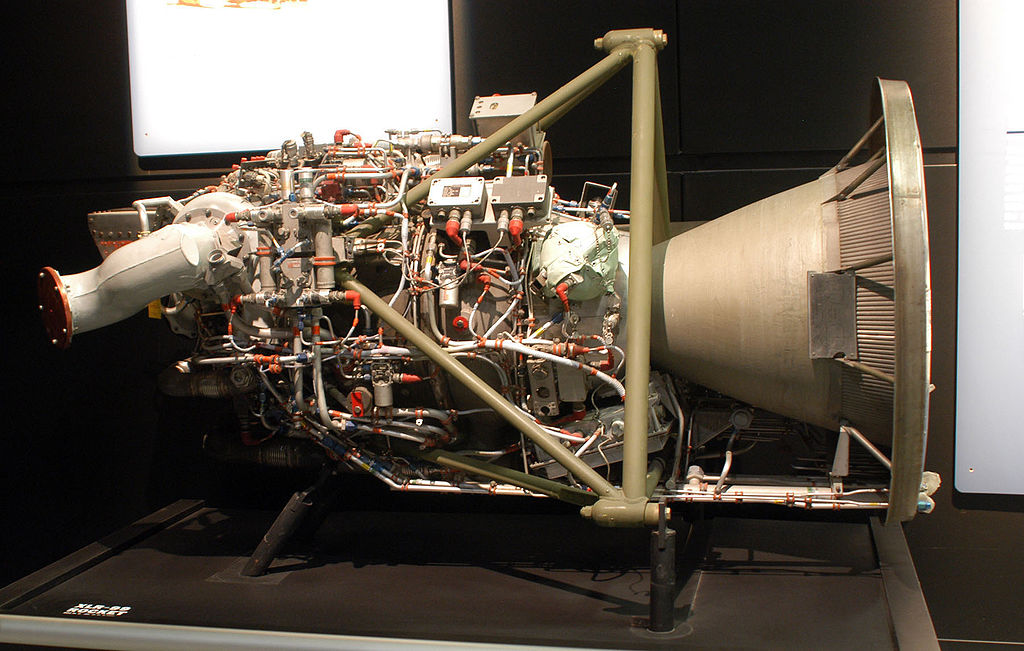 The XLR99 proved to be very reliable. 169 X-15 flights were made using the XLR99. 165 of these had successful engine operation. It started on the first attempt 159 times. 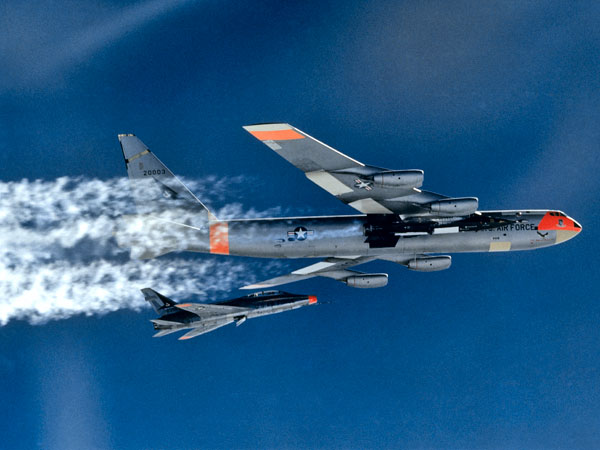 North American Aviation X-15A-1 56-6670 is on display at the Smithsonian Institution National Air and Space Museum. X-15A-2 56-6671 is at the National Museum of the United States Air Force.

WRITTEN BY:
Zivile Zalagenaite
Follow
This great AeroTime author has not written anything about himself yet.
Responses
See more discussion
Related Stories
This is interesting!