China’s Navy operates two aircraft carriers and plans to build at least two more. Could it dethrone the US Navy one day?

Could China’s aircraft carriers dethrone the US Navy?

Nine years ago, China’s People's Liberation Army Navy did not operate a single aircraft carrier. In 2021, its third aircraft carrier should be commissioned, while a fourth one could be laid down. What resides behind that impressive fleet expansion? Is China about to challenge the United States in the air and on the seas as a global military power?

The tip of the iceberg

As early as the 1980s, China’s People's Liberation Army Navy (PLAN) expressed the ambition of becoming a global actor. Between 1982 and 1997, Admiral Liu Huaqing, as Vice-president of the Central Military Commission, put together a doctrine that would see China launch by 2000 a green-water maritime force capable of defending its territorial waters, and by 2010 a blue-water navy that could project China’s power on a global scale.

While by the middle of the 1990s, the PLAN was already a formidable regional player, its global ambition was delayed by insufficient funding and a lack of know-how to properly build an aircraft carrier. In 1985, a first attempt was made at retro-engineering, following the acquisition of the HMAS Melbourne, a former Australian light aircraft carrier that started its career in the British Royal Navy… in 1945. It was eventually scrapped.

Following the fall of the USSR, Soviet ships entered the market. The Minsk and Kiev heavy aircraft carriers were respectively acquired in 1998 and 2000. But after being thoroughly studied, they ended up becoming tourist attractions.

In 1998, the Varyag, sistership of the Russian Navy flagship Admiral Kuznetsov, was acquired from Ukraine by a Macau-based company. Unlike the previous three acquisitions, the Varyag was never finished, as its production had been caught in the fall of the USSR. Thus, it was about 70% complete when it was towed from the docks of the Black Sea to the Dalian shipyards in the Liaoning province, on China’s northern coast. Much like the Kiev-class acquisitions, the hull of the Varang was officially destined to become a floating hotel.

After a decade of denial from the Chinese authorities, the aircraft carrier, renamed Liaoning, was refurbished and eventually commissioned by the PLAN in 2012. Designated Type 001, it is capable of carrying 40 aircraft including a wing of 26 J-15 fighter jets, the Chinese version of the Russian Su-33.

It was followed in 2018 by the Shandong (Type 002). Despite their similarities, this second aircraft carrier is ten meters longer and four meters wider than its predecessor. Its design is not exactly indigenous, but it was the first aircraft carrier completely built in China.

A new model of aircraft carrier, the Type 003, is already underway. In October 2019, after analysis of satellite imagery provided by Airbus, the Center for Strategic and International Studies determined that this third carrier would be sensibly bigger than its predecessors and may thus sport a flat deck and a catapult launch system (CATOBAR), possibly electromagnetic, allowing for heavier aircraft to be operated. The ship could be launched at sea by the end of 2021, with its commission set for 2025.

“2021 is a year full of expectations with the launch of the Type 003 aircraft carrier, but also the H-20 bomber,” Chinese military expert and commentator Song Zhongping noted recently on the Chinese state channel CCTV. The Xian H-20 is a stealth strategic bomber capable of carrying hypersonic missiles over a distance of 8,000 kilometers (5,000 miles).

The South China Morning Post reported that another sistership of the Type 003 class could be put in dry-dock in early 2021. A new type (004?) of aircraft carrier, nuclear-powered, is allegedly under study.

The exact number of aircraft carriers to be eventually operated by the PLAN is not confirmed, with some estimations saying that China could operate a fleet of 6 aircraft carriers by 2030, still behind the United States Navy and its 11 carriers.

However, things are changing fast and the Chinese industrial capacity should not be underestimated. Since 2012, the PLAN has more than doubled its tonnage and in September 2020, the US Department of Defense reported that its own Navy had finally been surpassed. “The PRC [People's Republic of China] has the largest navy in the world, with an overall battle force of approximately 350 ships and submarines including over 130 major surface combatants,” the Department said in a report. The US Navy’s battle force was approximately 293 ships in 2020.

As a comparison, every four years China launches the equivalent of the 118-ship strong French Navy, as noted by its Chief of Staff Admiral Pierre Vandier in a parliamentary hearing. If the production output is not a problem for China, it might however be caught up by a lack of sailors to man its brand-new ships.

But what is there to carry? 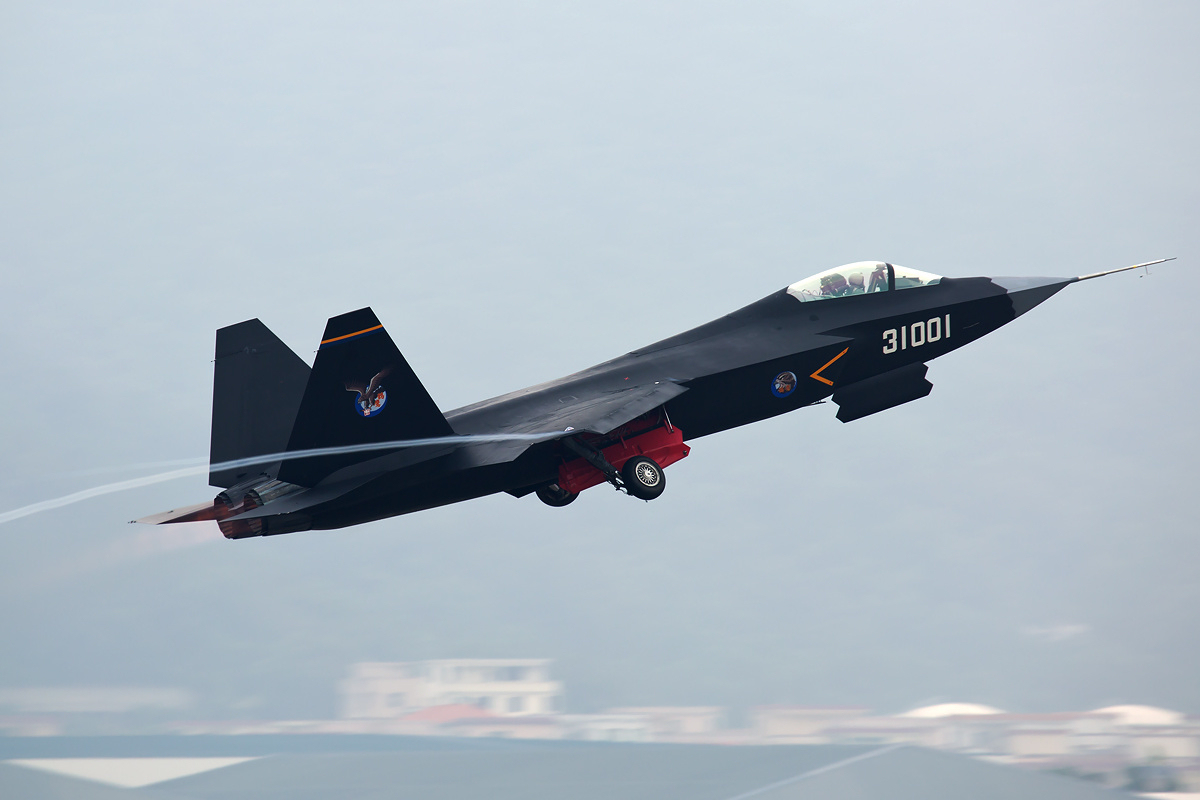 For the PLAN to defend its neighboring waters, let alone compete on a global scale, its aircraft carriers should also operate cutting-edge weapon platforms. However, as it is, China hardly has any carrier-capable aircraft to field against its competitors.

Currently, the sole Chinese fighter able to operate from an aircraft carrier is the Shenyang J-15. But that local version of the Russian Sukhoi Su-33, based on the Soviet Su-27 designed in the 1980s, hardly stands a chance against the F-35C of the US Navy, the F35B of the British Royal Navy, or even the Rafale Marine of the French Navy.

Thus, China is currently studying the conversion of one of its fifth-generation fighter jets to be carrier-capable. In 2019, the Shenyang FC-31 “Gyrfalcon” was rejected by the People's Liberation Army Air Force (PLAAF), which preferred its competitor, the Chengdu J-20 “Mighty Dragon”. Since then, both were reportedly considered for a maritime conversion. Being lighter and smaller than the J-20, the FC-31 seems like a better fit for a carrier. However, it has yet to enter service and prove its capabilities. On September 8, 2020, pictures of an upgraded and refurbished prototype of the Gyrfalcon emerged on Chinese social media, hinting that Shenyang was still actively working on its aircraft. Alternatively, a fighter jet with short takeoff and vertical landing capabilities (STVOL) is being studied by Chengdu, according to China Daily.

A carrier wing is not solely composed of combat aircraft, as aircraft carriers also need to have eyes in the skies. As such, having an airborne early warning (AEW) aircraft is primordial. For this role, most countries possessing an aircraft carrier use a helicopter such as the Westland Sea King, except for the United States and France, whose navies rely on a fixed-wing aircraft, the Grumman E-2 Hawkeye.

China could soon join this very exclusive club. In 2018, the development of an AEW plane by the manufacturer Xian was confirmed. Two years later, in August 2020, the KJ-600 took off for the first time. The aircraft, which bears a striking resemblance to the Hawkeye, would be fitted with an AESA-type (Active Electronically Scanned Array) radar. Enthusiastic Chinese analysts say the aircraft will be capable of spotting stealth planes such as the F-35, operated by the US Navy, but also by Japan and South Korea. Entry into service is expected between 2022 and 2025.

The garments of global power 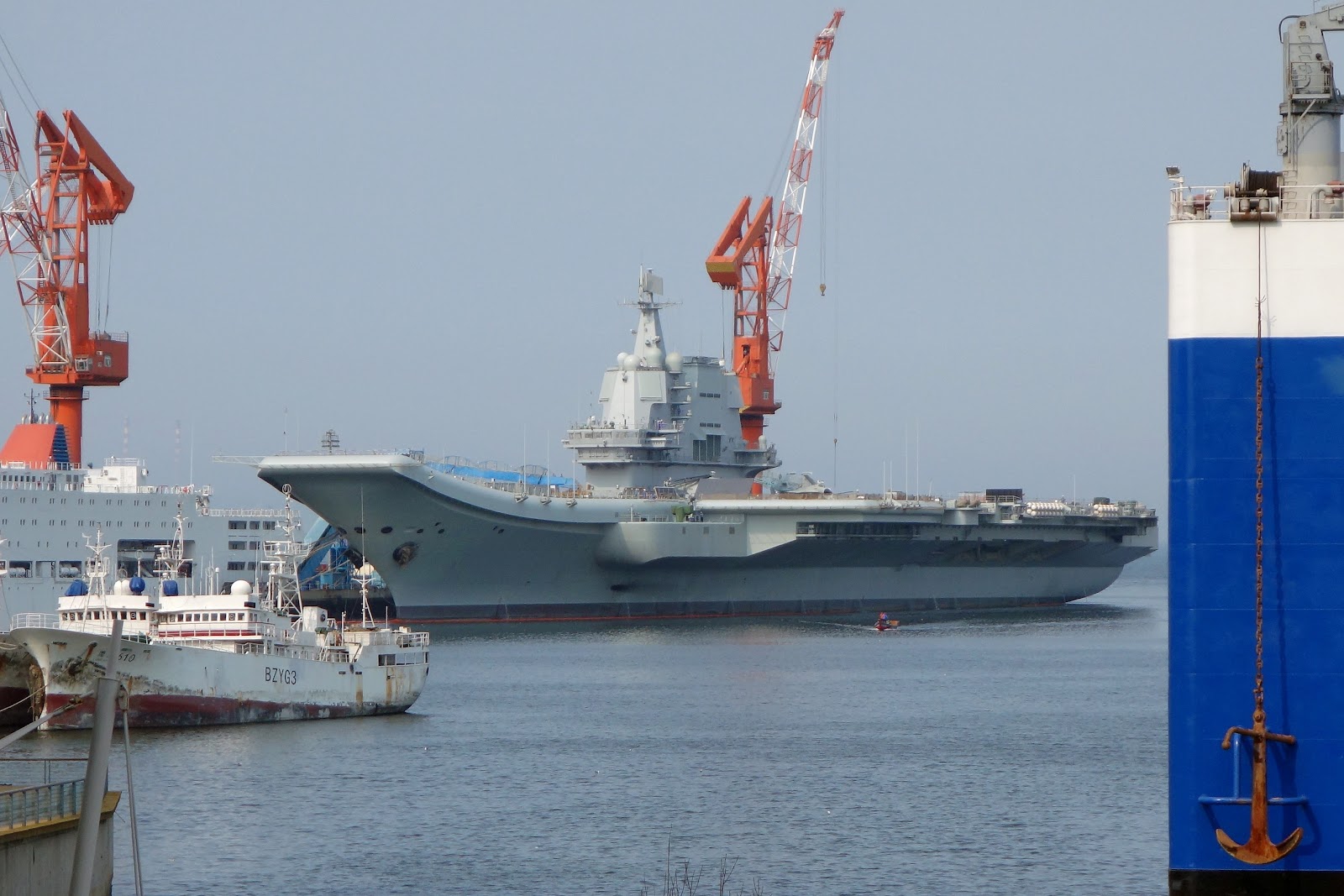 At first glance, it would be easy to assume that the PLAN is simply racing for the US Navy’s throne of dominating the blue seas. Decades of retro-engineering made the Western eye accustomed to see China copying what works for its competitors. The FC-31 and the KJ-600 mentioned above are there to prove it.

However, China’s ambitions might not be as obvious as its designs. In his report on the PLAN’s modernization, the specialist in Naval Affairs Ronald O'Rourke argued there was hardly a scenario where a high-intensity conflict with the US Navy would result in a victory for the PLAN. And if it were to attempt an attack on Taiwan, the Chinese aircraft of the PLAAF would easily be within range of the island, as they prove it countless times every year.

It is more likely that China relies primarily on the image associated with the massive ships. The positioning of a carrier battle group conveys a strong political message: In August 2020, as tensions reheated between Turkey and Greece over the exploitation of maritime resources, France sent its battle-ready Charles de Gaulle aircraft carrier cruising in the Eastern Mediterranean to show support for Athens. More recently, on January 24, 2021, the US Navy deployed a battle group led by the USS Theodore Roosevelt in the South China Sea region. Its official mission was promoting “freedom of the seas, and reassuring allies and partners.”

The Chinese Navy, which was still a regional fleet two decades ago, is now deployed all around the world. The PLAN’s naval groups cruise wherever Beijing’s interests are, from the South China Sea all the way to the Mediterranean. In 2017, a small Chinese flotilla even participated in drills in the Baltic Sea with the Russian Navy. With the construction of aircraft carriers, China is first and foremost aiming to set in stone its political status of world power.

While not actively seeking a confrontation with the US Navy, the PLAN is certainly trying to present an alternative to its hegemony on the sea. This message, more than a direct threat, could help China create new defense partnerships, even among the United States’ historical allies.

Could the Dash 8-400 unlock Africa’s domestic and regional potential?

Termed the “network builder”, the De Havilland Dash 8-400 could be a key to unlocking connectivity for Afric...

For decades now, China tried to acquire aircraft capable of vertical take-off and landing (VTOL). Should we expect a Chi...