On November 28, 1979 Air New Zealand sightseeing flight to Antarctica departed Auckland Airport. The flight was planned to proceed to the vicinity of McMurdo Station at the south end of Ross Island, off the continent of Antarctica, and then return to Christchurch International Airport on New Zealand’s South Island.

on 30th November 2017
Source : This Day in Aviation
This is interesting!

On November 28, 1979 Air New Zealand sightseeing flight to Antarctica, Flight TE 901, departed Auckland Airport (AKL) on the North Island of New Zealand, at 1917 GMT, 27 November (8:17 a.m., 28 November, local time). The flight was planned to proceed to the vicinity of McMurdo Station at the south end of Ross Island, off the continent of Antarctica, and then return to Christchurch International Airport (CHC) on New Zealand’s South Island. The duration of the flight was estimated to be 11 hours and would travel a total of 5,360 miles (8,626 kilometers), all during daylight hours.

Air New Zealand had previously flown thirteen Antarctic excursions. On this date, the airliner operated as Flight TE 901 was a five year old McDonnell Douglas DC-10-30, registration ZK-NZP. On board the airliner were a flight crew of five, cabin crew of fifteen and 237 passengers.

The pilot in command (PIC) was Captain Thomas James Collins. Captain Collins held an airline transport pilot license with a DC-10 type rating. He had flown a total of 11,151 flight hours, of which 2,872 had been aboard DC-10s. Because of the flight’s planned duration, the crew included two more pilots, First Officer Gregory Mark Cassin and First Officer Graham Neville Lucas. There were also two flight engineers, Flight Engineer Gordon Barrett Brooks and Flight Engineer Nicholas John Maloney. All were very experienced pilots, type-rated in the DC-10. None, however, had previously flown the Antarctic route.

19 days before the flight, Captain Collins and First Officer Cassin had received an audio-visual briefing of the planned flight. They also flew the route in a cockpit simulator. The route of previous flights had taken the airliners from the Ross Sea into McMurdo Sound, well west of Ross Island and its 12,448 foot (3,794 meters) active volcano, Mount Erebus. At a pre-determined waypoint, the airliner turned left toward McMurdo Station. The airline’s minimum altitude through this area was 16,000 feet (4,877 meters) until south of McMurdo Station, and then only if certain weather conditions were present. 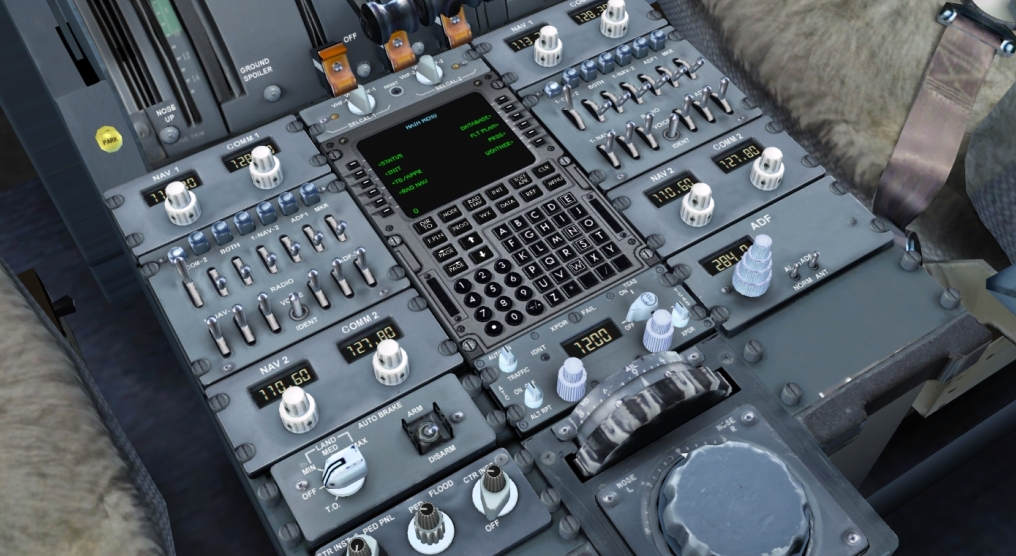 Air New Zealand flight planners had discovered that data which had been entered into the aircraft’s Area Inertial Navigation System (AINS) computer was incorrect. The coordinates of the for the destination waypoint were actually 2˚10′ west of the intended destination waypoint. The intended route was to take TE 901 directly over Mount Erebus to the emergency whiteout landing area near Williams Field (ICAO: NZWD) about 10 miles (16 kilometers) from McMurdo Station on the Ross Ice Shelf. Because of the data error, however, all previous flights had approached from well west of Ross Island before turning toward McMurdo Station at West Dailey Island. The navigation data was corrected, but the flight crew had not been informed of the change or the reason for it.

The flight toward Antarctica proceeded normally. Exactly five hours after takeoff, Captain Collins began a descent from TE 901’s cruising altitude. At this point the airliner was approximately 140 miles (225 kilometers) north of McMurdo Station. First Officer Cassin advised air traffic control, Mac Center, of their descent. The controller acknowledged and gave the current weather at McMurdo as “…low overcast in the area at about 2,000 feet [607 meters] and … some snow but our visibility is still about 40 miles [64 kilometers]…” In the cockpit, Captain Collins commented that the clouds were lower than previously reported, and that it would be “Very hard to tell the difference between the cloud and the ice”. 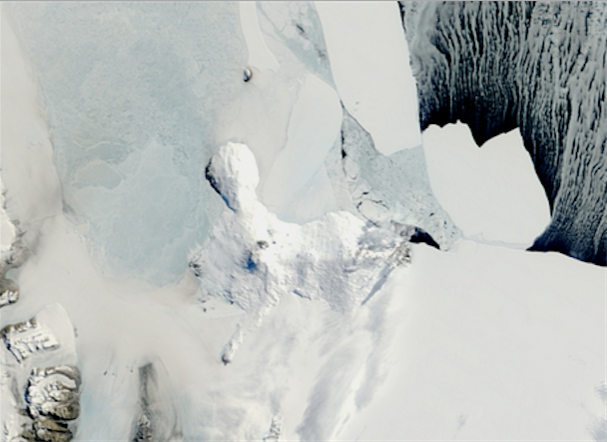 Satellite image of Ross Island. McMurdo Station is at the tip of the narrow peninsula in the lower left quadrant. (NASA)

Over the next six minutes, TE 901 traveled 50 miles as it descended to FL 180. Radio transmissions during the let down were unclear, with Mac Center, Flight 901 and Ice Tower all trying to make contact. It is possible that the high terrain between the airliner and McMurdo Station was blocking the signals. The pilots discussed using other frequencies. Captain Collins and Flight Engineer Brooks discussed the airliner’s present weight and the minimum speed required, which was calculated to be 252 knots. 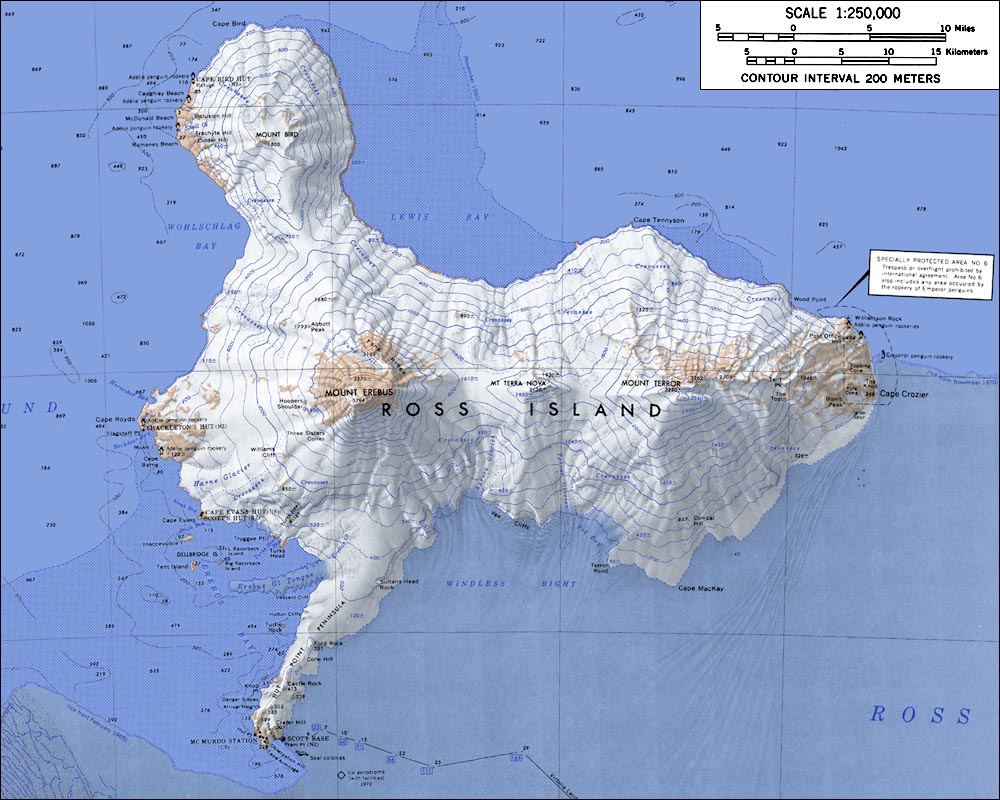 At 00:24:44, the DC-10’s Altitude Alert sounded, indicating that the airplane had reached the assigned altitude of Flight Level 180.

At 00:31:01, Captain Collins told the crew, “I’ll have to do an orbit here I think.” Seven seconds later, he said, “Well actually it’s clear out here if we get down… and—” Someone in the cockpit replied, “It’s not clear on the right hand side here”. First Officer Cassin said “No.”

Captain Collins had observed an opening in the clouds to the left of the airplane, and decided to descend further under visual conditions. He first began a descending 360˚ turn to the right, followed by a descending 180˚to the left. This put the DC-10 on a course away from McMurdo Station at 10,000 feet (3,048 meters). Captain Collins and the two flight engineers discussed the desired airspeed. With the flight still continuing outbound, at 00:42:49, Collins said, “We’re VMC [Visual Meteorological Conditions] around this way so I’m going to do another turn in.” The flight’s expert commentator, Peter Mulgrew, had entered the flight deck. Captain Collins said, “Sorry haven’t got time to talk but—” Mulgrew replied, “Ah well you can’t talk if you can’t see anything”. However, Mulgrew remained in the cockpit.

At 00:45:00, First Officer Cassin called McMurdo Center and reported “…we are now at six thousand descending to two thousand and we’re VMC”. The world’s most southern active volcano, Mount Erebus on Ross Island, Antarctica, has a height of 12,448 feet (3,794 meters). (Tattered Passport)

Passing through 3,000 feet (914 meters), Flight Engineer Brooks asked, “Where’s Erebus in relation to us at the moment?” Someone answered, “Left about twenty or twenty-five miles.” Someone else asked, “Left do you reckon?” A voice said, “Well I don’t know—I think.” An unknown voice said, “I’ve been looking for it.” Cassin replied, “Yep, yep.” Brooks then said, “I’m just thinking of any high ground in the area, that’s all.”

Mulgrew replied, “I think it’ll be left, yes.” The second flight engineer, Nick Maloney, then said, “Yes, I reckon about here.”  Mulgrew answered, “Yes—no, no, I don’t really know.” Then at 00:47:02, he said, “That’s the edge,” probably indicating that he could see the edge of the ice sheet ahead.

At 00:47:06, a crewmember announced, “Down to two thousand.” Both Collins and Cassin acknowledged this, “Yes.” — “Yes.” The crew then set the flight director to hold airspeed and altitude.

At 00:47:43, Captain Collins said, “We might have to pop down to fifteen hundred here I think.” Cassin replied, “Yes, OK… Probably see further in anyway… It’s not too bad… I see vert speed for fifteen hundred feet.”

Flight Engineer Maloney said, “—It’s not right.” An unknown voice then said, “Bit thick here eh Bert?” Maloney replied, “Yeah my… oath… (pause) You’re really a long while on... instruments this time are you?” Mulgrew then said, “I reckon Bird’s through here and—Ross Island there.” Maloney answered, “Yes,” and Mulgrew continued, “Erebus should be there.” Captain Collins says, “Right.” For the next forty seconds the crew discussed radio and navigation frequencies. 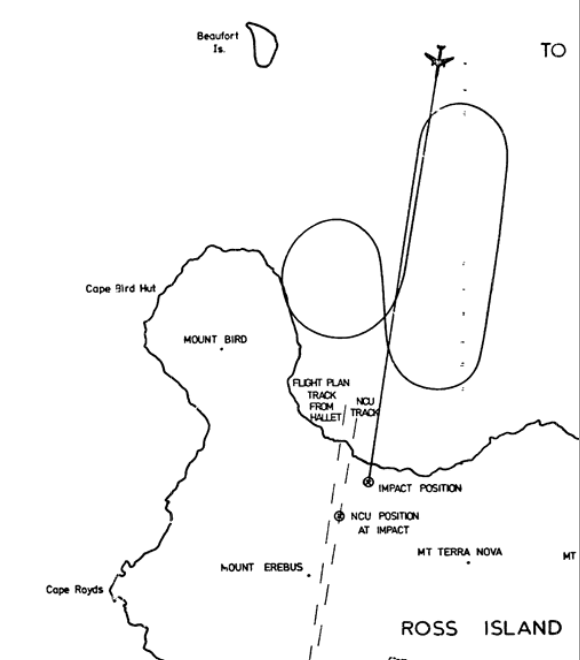 The navigation computer showed the position of Flight 901 a few miles farther to the south and slightly left of its actual track—closer to Mount Erebus. (Transport Accident Investigation Commission) This detailed graphic shows the flight path and descent profile of Flight TE 901 and correlates CVR and FDR data to give an idea of where the airplane actually was and where the crew thought it was. (Transport Accident Investigation Commission) Looking west at the crash site of Air New Zealand Flight TE 910 at an elevation of 1,467 feet (447 meters) above Sea Level, on the north slope of Ross Island, Antarctica. Mount Erebus is at the upper left of the photograph. The terrain has a gradual upward slope of 13˚, and cross slope, right to left, of -5˚. The debris field is aligned on a heading of 190˚ True and is approximately 570 meters long. (Bureau d’Archives des Accidents d’Avions)

The intensive investigation of the accident showed that, based on the route briefing, the flight crew expected to be about 26 miles to the west. In fact, TE 901 had proceeded almost precisely along the planned track. Analysis of the navigation computer showed that its INS position was in error by just 3.1 nautical miles (3.6 miles/ 5.7 kilometers), well within its known tolerance. It was indicating almost the exact location of the flight, if anything, closer to Mount Erebus than it really was.

Much controversy ensued over who was at fault for the position error. Regardless of whether the flight was on the intended track, or on the erroneous track 25 miles west, the crew was fully aware that they were well north of McMurdo Station. Air New Zealand had established a minimum safe altitude of 16,000 feet (4,877 meters) until the flight was south of McMurdo.

3.37 Probable cause: The probable cause of this accident was the decision of the captain to continue the flight at low level toward an area of poor surface and horizon definition when the crew was not certain of their position and the subsequent inability to detect the rising terrain which intercepted the aircraft’s flight path. The largest remaining fragment of McDonnell Douglas DC-10-30 ZK-NZP was this portion of the fuselage and wings. (AP Images)

On this day: The crash of Continental Airlines flight 1713

Five members of the Venezuelan military died when their Cessna C-208 crashed during a training mission, the country&rsqu...