For the very first time, F-35B Lightning II fighter jets of the Royal Air Force and the Royal Navy have landed on the HMS Queen Elizabeth aircraft carrier while off the coast of the United States.

The seven F-35B Lightning fighter jets are undergoing operational trials with the carrier. They belong to the Number 617 Squadron, a joint squadron composed of personnel from both the Royal Air Force and Royal Navy, which is the first of the British military to be equipped with the Short Take Off Vertical Landing (STOVL) variant of the Lockheed Martin aircraft.

The testing campaign, called WESTLANT 19, evaluates the capacity to operate as a Carrier Task Group (or Carrier Strike Group) through the development of combat techniques for exploiting the fighter’s capabilities, as well as strengthen its interoperability with the US Marine Corps.

“This is another step towards the UK’s carrier strike capability becoming fully operational,” said Defence Secretary Ben Wallace in a press release, adding that “the bringing together of the UK Lightnings on the first in class HMS Queen Elizabeth paves the way for the world’s most up to date, fully integrated carrier force”.

The campaign, that should last eleven weeks, will see more than 500 launches and landings. It will allow determining the rules for the safe operation of the aircraft onboard the carrier. Despite its VTOL capability, the F-35B from the carrier group will use the shipborne rolling vertical landing (SRVL) method. This technique, by taking advantage of both the vertical thrust and the lift from the wings, allows for landing on a short distance, with a heavier payload than a pure vertical landing.“These trials are aimed at ‘end-to-end’ testing of the aircraft and personnel to ensure the aircraft are compatible with the carrier”, explains the British Ministry of Defence.

Interoperability is critical for the British aircraft carrier. The number of Royal Air Force and Royal Navy F-35B fighters is not yet enough to constitute a full Carrier Strike Group. The ship was built to operate 24 aircraft on average and can transport a maximum of 35 fighter jets. Thus, for its first operational deployment scheduled for 2021, the HMS Queen Elizabeth should have a mixed US-British air group. 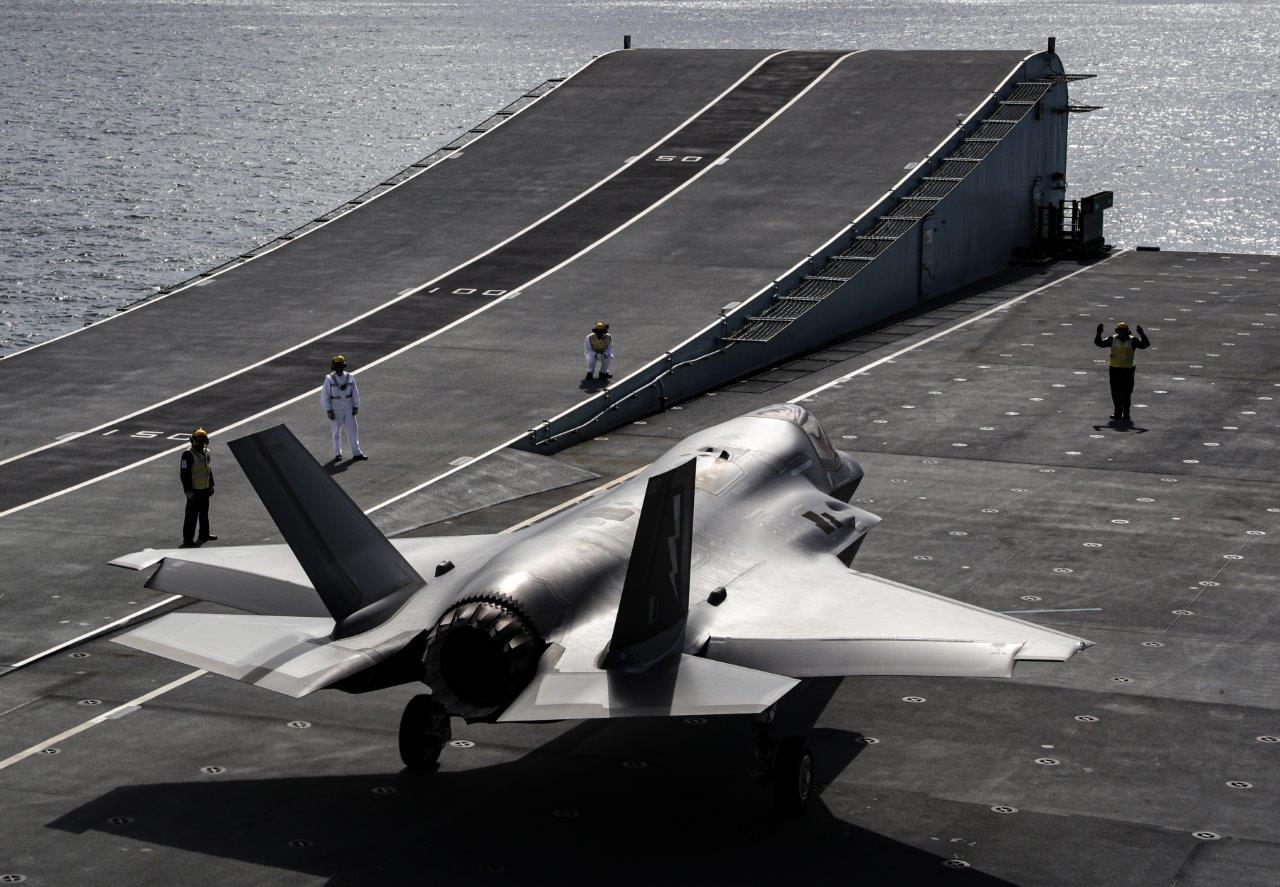 USAF launches construction of first permanent F-35 base in Europe
Representatives of the United States Air Force and of the British Ministry of Defence met in RAF Lakenheath, east of England, on July 15, 2019, to mark the beginning of the construction of a new F-35 Lightning II infrastructure.
United Kingdom United States Lockheed Martin Royal Air Force F-35B HMS Queen Elizabeth Royal Navy
Like

Lieutenant Avani Chaturvedi, the first female pilot of the Indian Air Force (IAF) to have completed a solo flight, will...

A Russian Su-30 fighter jet was shot down by another aircraft during an exercise on September 22, 2020. Both pilots succ...

Risk of explosion: Dutch F-35As must stay away from thunderstorms

Among several other deficiencies, the Koninklijke Luchtmacht (KLu), the Royal Dutch Air Force identified a defect on its...

The Ministry of National Defense of Taiwan reported that no less than eighteen Chinese military aircraft crossed the mid...

Guillaume Faury: Airbus is in danger of collapse