In accordance with the United States President Donald Trump’s wishes, the new livery of the upcoming U.S. presidential plane, colloquially known as Air Force One, has been revealed in a budget report from the Pentagon. The VC-25B should trade the sky blue and white color scheme for a red, white and dark blue paint job.

In accordance with the United States President Donald Trump’s wishes, the new livery of the upcoming U.S. presidential plane, colloquially known as Air Force One, has been revealed in a budget report from the Pentagon. The VC-25B should trade the sky blue and white color scheme for a red, white and dark blue paint job.

The current main planes of the U.S. presidential fleet, the two VC-25As, were handed over by Boeing on August 23, 1990. The Boeing 747-200B, whose airframe they were based on, is now out of production and maintenance is becoming more and more timely and costly. It takes “well over a year for heavy maintenance to maintain compliance with Federal Aeronautics Administration airworthiness standards,” according to the Department of Defense.

In 2007, it was announced that the USAF would study a possible replacement for the VC-25As. In January 2015, the decision was made for the two presidential planes to be replaced by two 747-8s, with the delivery expected by 2024.

Air Force One, the flying White House
If there is one aircraft as famous as the Pope, one name as recognizable as Coca Cola in the aviation world, it is the Air Force One. The sole mention of this plane is enough for most people to see its light blue, white and gold livery. Get to know the rock star of airplanes.

But on December, 6, 2016, the procurement plans hit a bump. A month after his election, President Donald Trump had announced that he would scrap the order previously made with Boeing. “The plane is totally out of control. It's going to be over $4 billion for this Air Force One program, and I think it's ridiculous,” Trump said at the time, commenting “I think Boeing is trying to do a little bit of a number. We want Boeing to make a lot of money, but not that much money.”

The commander-in-chief renegotiated a $4 billion deal with Boeing for two new presidential planes to replace the current Boeing 747-200s. "Boeing gave us a good deal. And we were able to take that," Trump was quoted by CBS News. "But I said, 'I wonder if we should use the same baby blue colors?' And we're not". The choice had sparked protests among some lawmakers.

"It will be red, white and blue," Trump had decided, preferring a “Star Spangled Banner” color-scheme to the sky blue and white livery introduced by John F. Kennedy in 1962. On February 10, 2020, a budget report from the Pentagon confirmed the new livery of the upcoming Air Force One. 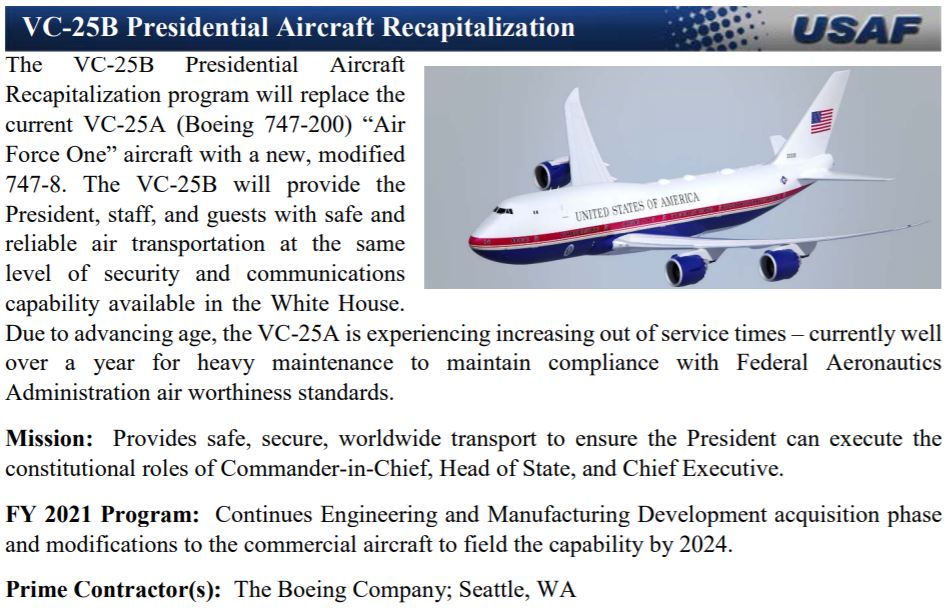 If the new color scheme is now a given, the budget, however, has bloated again. In June 2019, Defense One reported that the price tag could reach around $5.3 billion. For now, the Pentagon budget report notifies the cost of the Research Development Test & Evaluation for the new presidential plane would be $800.9 million.

The government of the Central African Republic reports that an aircraft bombed a base in Bossangoa where Russian “...

Swedish MP calls for the sale of Gripens to Ukraine

A member of the Swedish parliament has called for the sale of Jas 39 Gripen fighter jets to Ukraine despite opposition...

Bombardier Defense will begin the conversion of a Global 6000 business jet into a spy plane for Germany’s intellig...