Flying wings are not a new concept. If so far, they have only been applied to the military sector, their many advantages have led manufacturers and even airlines to relentlessly attempt to bring this disruptive design into the commercial sector.

Will flying wings carry us into the future of aviation?

Flying wings are not a new concept. If so far, they have only been applied to the military sector, their many advantages have led manufacturers and even airlines to relentlessly attempt to bring this disruptive design into the commercial sector.

As old as aviation itself

The idea of a flying wing dates back to the first days of aviation. Humanity tried to conquer the skies by biomimicry, as they saw the wings of birds and bats as the natural way to go. One could argue that as early as 1485, the Ornithopter of Leonardo da Vinci presented the characteristics of a flying wing: no fuselage and no tail, using the whole airframe as a lift-generating surface.

In 1876, two French engineers, Alphonse Pénaud and Paul Gauchot, filed an ambitious patent for a seaplane with a flying wing structure that also featured one of the first retractable landing gears. However, the project failed to find sufficient funding and overwhelmed by his financial failure, Alphonse Pénaud eventually killed himself. A few more concepts emerged in the following decade from engineers such as René Arnoux or John William Dunne. But it was not until the end of the First World War, with the development of civil aviation, that for the first time the idea made its way into the commercial market.

In 1929, the Junkers G 38, designed by the famous German engineer Hugo Junkers, took off for the first time: the civilian aircraft could carry 34 passengers, some of them sitting in the wings. Lufthansa (LHAB) (LHA) would use the prototype for charter and scheduled flights under the designation D-2000. But while the fuselage was reduced to a minimum, it still possessed a tail.

The Treaty of Versailles, signed by a defeated Germany in the First World War, had a major influence over German engineering. The country was forbidden to rearm, and thus aeronautical engineers switched their focus towards gliders. It was in this context that two brothers, Walter and Reimar Horten, began developing their flying wings.

When the Second World War broke out, the Horten brothers already developed a few successful flying wings . Their Ho II and Ho III gliders were considered by the Luftwaffe as an efficient way to deliver ammunition during a hypothetical invasion of the United Kingdom. That invasion was never meant to be.

For several years, the Horten brothers continued improving their wing glider until 1944, when they were contracted by the Luftwaffe to integrate two turbojets to their design. Thus was born the Ho IX (also known as the Ho 229 or Go 229). The aircraft was one of the few concepts that fit the “3×1000” doctrine of Hermann Göring, Supreme Commander of the Luftwaffe, meaning that it could transport 1000 kilograms of bombs for 1000 kilometers at a speed of 1,000 kilometers per hour. The two engineers even imagined a specific coating that would have improved the stealth ability of their bomber.

The Ho IX never entered service and in April 1945, the U.S. Army seized the prototypes in the factory. The brothers continued to design flying wings until their death.

The obsession of one man: Jack Northrop

On the other side of the Atlantic, the obsession for flying wings was shared by another famous name in aviation history: Jack Northrop. After two unsuccessful attempts (the X-216H and the Northrop Type 9), Northrop became aware of the Horten’s research on tailless flying gliders. In 1939, he came up with a new aircraft, the Northrop N-1M, a long-range bomber destined to cross the Atlantic to operate in Europe. In July 1941, a scale model prototype took to the skies for the first time, becoming the first operational powered flying wing. While the concept was not developed, it raised the interest of the newly created United States Air Force for the unconventional design.

From this moment, Northrop would regularly adapt the flying wing characteristics to the needs expressed by its new client (the XB-35 and the XB-49 bombers, the XP-79 fighter jet, and even some drones such as the JB-1 and JB-10) but failed to win any contract. 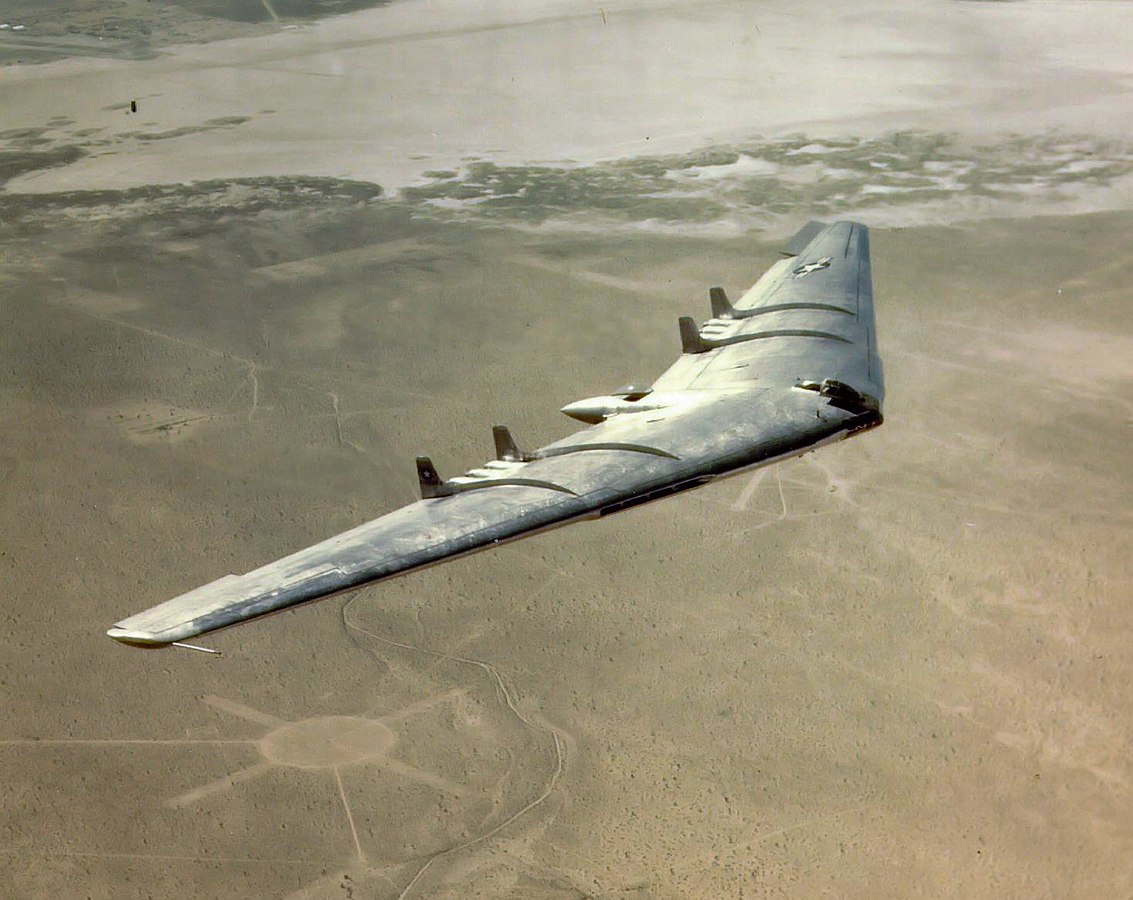 However, in a perfect example of serendipity, it is said that the manufacturer discovered the stealth capabilities of the flying wing during the flight tests of the XB-49, as its small radar cross-section made it hard for airports to see the approaching aircraft.

In 1975, Northrop competed against Lockheed and McDonnell Douglas in the Experimental Survivable Testbed (XST) stealth bomber program, but fell short to Lockheed’s Have Blue concept that would become the legendary F-117 Nighthawk.

Fortunately, Northrop did not give up, and it went on to participate in the Advanced Technology Bomber (ATB) program, which was supposed to provide a new generation bomber. Flying for the first time in 1989, the B-2A Spirit strategic bomber would become one of the backbones of the United States nuclear deterrence to this day.

In 2015, the USAF trusted Northrop again to develop its first bomber of the XXI century, the B-21 Raider. After the success of the B-2A, other manufacturers would develop their own flying wings: Boeing with its MQ-25 Stingray refueler drone, Dassault with the nEUROn demonstrator, and even startups such as the Swiss senseFly (a subsidiary of Parrot) with the miniature eBee, a fully autonomous mapping drone.

If the stealth capability of the design is irrelevant to passenger transport, the low drag and increased lift surface of the flying wing could significantly save on fuel consumption by as much as 20%, marking a step forward towards a more sustainable aviation. Moreover, by giving the ability to place the engines on top of the airframe, the noise perceived on the ground could be reduced.

But if the concept has been mastered for 30 years, its application to commercial aviation raises several problems. The main one is passenger experience. By moving away the seats from the plane’s center of gravity, it increasingly subjects passengers to yaw and rolling movements and could induce some discomfort. The tailless design also proves to be rather unstable and difficult to control due to the scarcity of yaw control surfaces.

Another issue is modularity. The classic “tube and wing” configuration allows for easy derivations: by extending or reducing the fuselage, a manufacturer can create a whole family of aircraft. But the calculations behind the Blended Wing Body are more complex, and any modification to the cabin would have consequences for the wings, making each design unique.

Nonetheless, with the same persistence as their military counterparts, commercial aircraft manufacturers and airlines have been trying to outweigh the cons. McDonnell Douglas was the first to seriously study the concept of the Blended Wing Body, a hybrid between a conventional fuselage and a flying wing, as early as the 1990s. However, after it was acquired by Boeing in 1997, the aircraft stayed on the drawing-board.

The same year, a model developed by Boeing Phantom Works, in collaboration with NASA and the USAF, took to the skies. It was turned into a full-size aircraft named the X-48A, with a wingspan of 10.7 meters (35 feet) but was eventually abandoned in 2004.

Two smaller versions of only 6.4 meters (21 feet), the X-48Bs, were assembled by UK-based Cranfield Aerospace, a division of the Cranfield University, and were successfully tested in flight between 2007 and 2010. 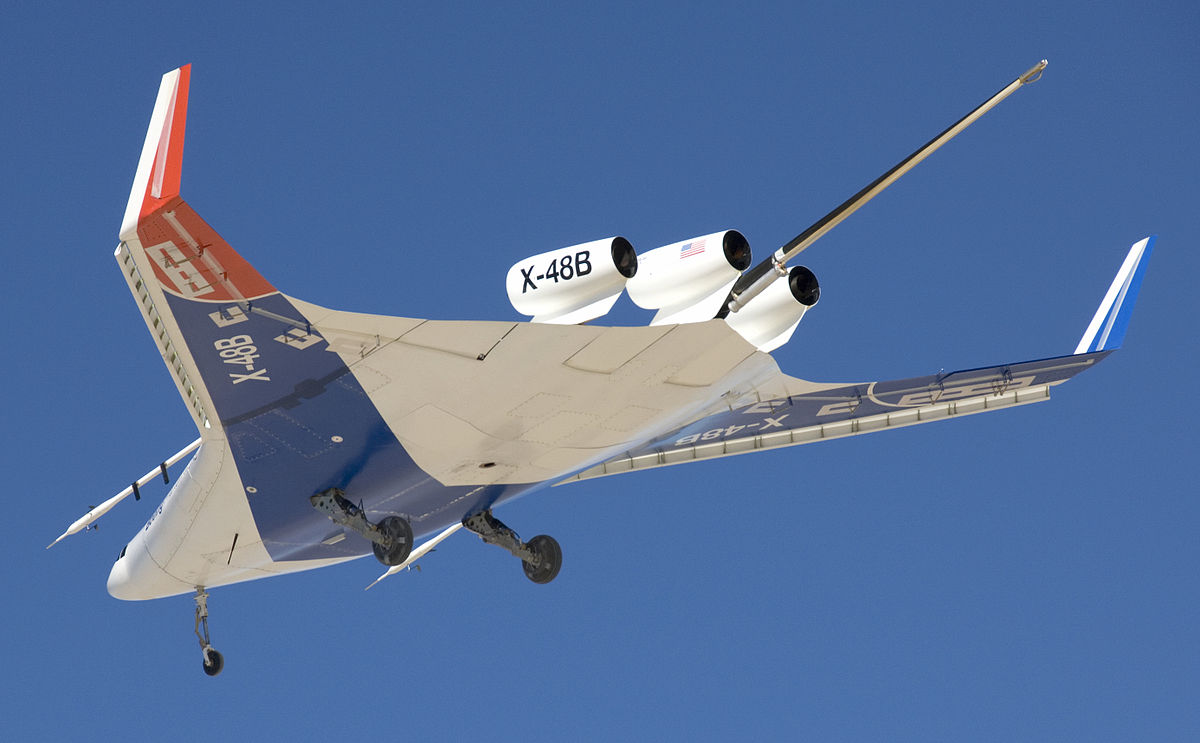 The X-48B during its first test flight (Credit: NASA)

An ultimate version, the X-48C Hybrid Wing Body aircraft, flew between 2012 and 2013, before the program came to an end. “Our team at NASA Dryden has done what we do best, flight test a unique aircraft and repeatedly collect data that will be used to design future ‘green’ airliners,” Heather Maliska, NASA Dryden’s X-48C project manager, said at the time. Boeing is reportedly working on a bigger version, but it has yet to be unveiled to the public.

On June 2, 2019, KLM Royal Dutch Airlines showed interest in the concept. During the IATA Annual General Meeting in Seoul, South Korea, the airline signed a cooperative agreement with Delft University of Technology (TU Delft) to work together on the “Flying-V”, a wide-fuselage long-haul aircraft that integrates the passenger cabin, cargo hold and fuel tanks in the wing structure. The first flight test is expected to take place in 2020.

Last but not least, Airbus lifted the veil on one of its secret projects named MAVERIC during the 2020 edition of the Singapore Airshow 2020. Started in 2017, the 2-meter long and 3.2-meter wide model completed its maiden flight in June 2019. The flight-test campaign should continue until the middle of 2020.

All in all, 2020 could be the year when we finally know if the flying wings are the way of the future for commercial aviation.

Airbus unveils MAVERIC, the airliner of the future [Video]
During the Singapore Airshow 2020, Airbus lifted the curtain on one of its secret projects named MAVERIC. The flying wing technological demonstrator offers a glimpse into the commercial aircraft of the future.
Advertisement
Airbus Boeing B-2 Spirit B-21 Raider MAVERIC Northrop

Rolls-Royce is currently developing turbogenerators in order to extend the range of hybrid-electric aircraft....

One of China’s first unmanned aircraft vehicles (UAV), the TP500, has completed a successful maiden flight. ...

AeroTime speaks to Inmarsat and Panasonic about post-pandemic inflight entertainment and connectivity trends ...

China, Russia fly bombers off the coast of Japan during Quad summit

Meet Energia: Embraer unveils a family of next generation aircraft