Russia’s sole aircraft carrier, the Admiral Kuznetsov, could not return to operations before 2022. And with the new doctrine of the Russian Navy refocusing on submarines, the ship could even be condemned to an earlier retirement date. Nonetheless, the Nevskoye Planning and Design Bureau (NDB) presented a concept for a new aircraft carrier, called the UMK Varan. It would use the CATOBAR (Catapult Assisted Take-Off Barrier Arrested Recovery) technology to operate its aircraft.

Unlike its potential successor, the Admiral Kuznetsov aircraft carrier which was also designed by NDB uses the STOBAR (Short take-off but arrested recovery) system which employs a ski slope to get the planes airborne. Currently, only the navies of the United States and France have a CATOBAR aircraft carrier, though China, and possibly India, are in the process of building one.

The length of the UMK Varan reaches about 220 meters (720 feet), which is a hundred meters (300 feet) shorter than its predecessor. It could carry 24 fighters, six helicopters, and up to 20 drones, though not much is known about which aircraft specifically. Currently, the Russian aeronaval fleet is composed of Su-33 and MiG-29K fighters. 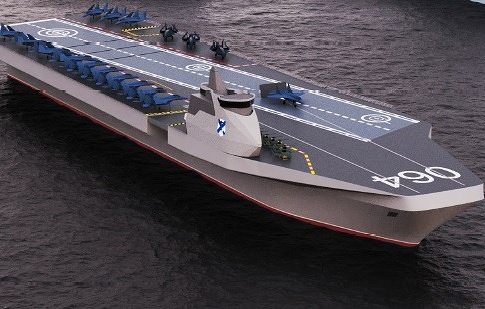 The curse of Kuznetsov

The last deployment of the Admiral Kuznetsov dates back to 2016 when it was used to support Russian operations in Syria. Since 2017, it has been immobilized for renovation ‒ a project which has hit a few bumps since then.

In October 2018, an incident put Admiral Kuznetsov in jeopardy. Its floating deck, unique in the world, suddenly sank and a crane that fell on the bridge caused extensive damages. A year later, in December 2019, welding operations on one of the aircraft carrier’s power units were ongoing, when a fire broke out.

With the decision to purchase a primary radar system, Ireland will no longer be solely relying on the British Royal Air...

Japan has issued evacuation notices to its residents after North Korea fires a ballistic missile over the country. ...

The RAAF and the US Air Force further strengthened relations between the two nations by signing a Joint Vision Statement...