Planespotting: up close and personal with the USAF. F-15s, Osprey and C-130 aircraft based at RAF Mildenhall and RAF Lakenheath.

Planespotting: RAF Mildenhall and RAF Lakenheath, home of the USAF

After years spent years following and spotting United States Air Force aircraft on training sorties across North Wales, I decided it was about time I took a trip to the USAF bases they come from, RAF Lakenheath and RAF Mildenhall.

Despite their RAF titles, these two military bases in Suffolk have been home to US Air Force units since the beginning of the Cold War when President Harry S. Truman ordered the Strategic Air Command bombers to set up bases in Europe. The two bases are surrounded by their own military towns, with accommodation and amenities behind towering security fences.

The history of Mildenhall goes back to the late 1920s when the British military developed the site in order to house a bomber base. The airfield opened in 1934 and soon attracted global attention when it was chosen to host the Royal Aero Club’s MacRobertson Air Race in October 1934.

At the time, the race was the longest of its kind, departing from Mildenhall and finishing in Melbourne, Australia. Mildenhall was attended by a strong crowd of 70,000 spectators and a royal visit from King George V.

From the early 1950s and throughout the Cold War, the Strategic Air Command of the USAF grew its presence at Mildenhall and today RAF Mildenhall is home to four USAF Commands, the ‘USAF in Europe: Air Forces Africa’ and ‘USAF Special Operations' being the most active.

Most notably under the USAFE-AFAFRICA Command is the 100th Air Refueling Wing, comprised of the enormous quad-engine Boeing KC-135R Stratotankers. These KC-135R have been in operation for nearly six decades and are used to refuel other military aircraft in flight.

The Boeing CV-22 Osprey, seen on the ground at RAF Mildenhall, is a tilt-rotor aircraft, capable of vertical takeoffs with the ability to hover like a helicopter. Once airborne, the engines can rotate through 90 degrees, effectively turning the aircraft into a long-range, high-speed turboprop.

The USAF Lockheed C-130 Hercules, here photographed performing a practiced diversion (PD) at RAF Valley in North Wales, is a military transport aircraft based at RAF Mildenhall. The aircraft provides a wide range of services within the military from airlifts and airdrops to weather reconnaissance. What makes the C-130J so valuable is its agility, capable of landing on dirt strips and beaches, with an incredibly short take-off and landing distance. 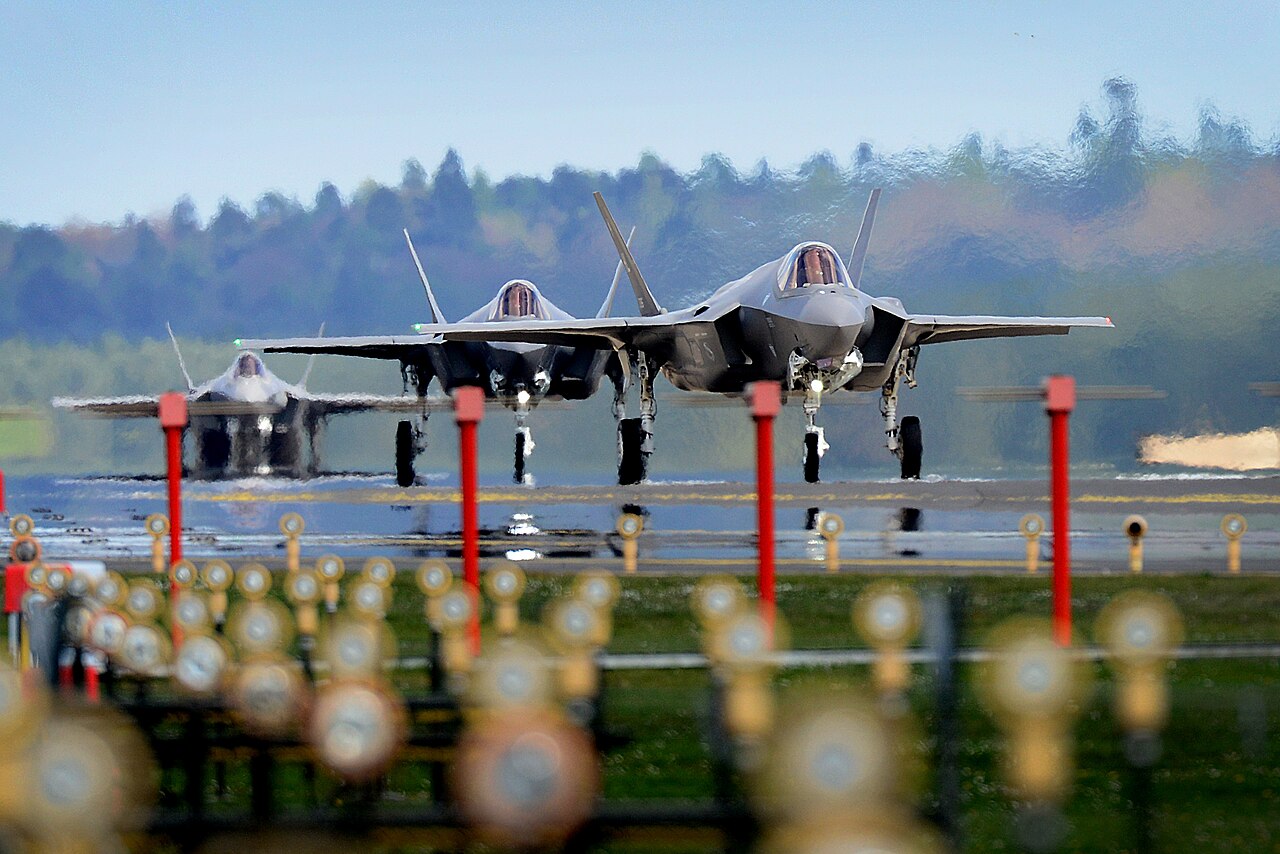 The 48th Fighter Wing was previously stationed in France. However, following Charles de Gaulle’s decision to withdraw non-French nuclear forces from the country, the 48th redeployed to Lakenheath and arrived on January 15, 1960. It is now the sole unit based at Lakenheath.

The F-15s are all-weather tactical fighter aircraft, capable of flying Mach 2.5 (3018km/h) up to 65,000ft. The incredible thunderous roar of the afterburners on take-off is tremendous, literally shaking the ground as you stand watching them take to the sky. The F-15s are frequently out training in my area of North Wales and are a popular visitor attraction through the Mach Loop.

What makes Wales’s Mach Loop so popular with military plane spotters?
Read Alec Wignall’s latest article to learn about the Mach Loop in Wales, one of the world’s best viewing spots for low-level tactical military flying.

The newer F-35A Lightning aircraft are a recent addition to the Lakenheath 48th Fighter Wing, with four aircraft having arrived on December 15, 2021. These latest Lockheed fifth-generation fighters are designed for stealth with the ability to withstand 9G. In total there will be 24 aircraft in the new F-35 squadron nicknamed the ‘Valkyries’.

The Czech Republic is considering the replacement of its leased JAS-39 Gripen with an order for 24 Lockheed Martin F-35A...

Spain has placed an order for 20 Eurofighter jets to replace the older combat aircraft fleet operated on the Canary Isla...

The first Chinook CH-47F heavy-lift helicopters could start arriving in 2026, Boeing executives said at the Berlin ILA A...

Lockheed Martin is working at top speed to finalize a F-35 deal for Germany, after Berlin decided on the fifth-generatio...

China, Russia fly bombers off the coast of Japan during Quad summit

Meet Energia: Embraer unveils a family of next generation aircraft